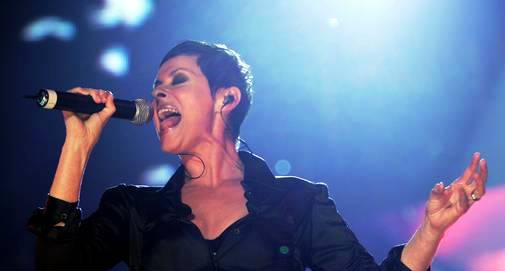 Music biz lore decrees that the release of a new album necessitates a promotional tour and so, on the back of her excellent new ‘Deeper’ long player, LISA STANSFIELD’S just embarked on a 12 date whiz around the UK. We caught up with her for the fourth leg of the tour at Liverpool’s beautiful Philharmonic Hall – which was packed to its elegant art-deco rafters with adoring fans from, seemingly, across all age ranges.

Sadly the fans had to endure an inappropriate support act…. Irit, an Israeli singer who’s repertoire was a hybrid of French chanson and Eurovision. Yes, odd and not the best way to set up the audience for Ms S. The frustration was palpable – not helped by a too lengthy interval before Rochdale’s finest took to the stage.

Resplendent in gold, be-spangled harem pants and a just-right tuxedo, Lisa was backed by a tight and tough 8 piece band (that included husband and musical collaborator Ian Devaney and Mark “Snowboy” Cotgrove) and surrounded by a state-of-the-art multimedia installation that alternated between Orla Kiely style pattering and tasteful black and white video clips. They’re the externals, of course; what counts is the substance and the soul and the toned and energetic singer delivered with passion and professionalism.

The set was a mix of songs from ‘Deeper’ (including the magnificent title track and the gut wrenching ‘Hole In My Heart’) and her greatest hits. Of the hits, ‘So Natural’ was delivered acoustically with a pared down band, but the Stansfield acolytes had come to party and they rose as one as the now jacket-less Lisa tore into tunes like ‘The Real Thing’, ‘All Around The World’ and ‘People Hold On’.

The set ended with a sombre reading of ‘Ghetto Heaven’ (another song from ‘Deeper’); then, the obligatory encore – Lisa’s famed medley of ‘Live Together’ and ‘Young Hearts Run Free’ which left the audience yelling for even more… but to no avail! For more they’ll need to catch Lisa at any of the remaining seven shows. They’re listed below. In the meantime go to our reviews section for an-depth consideration of the ‘Deeper’ album.