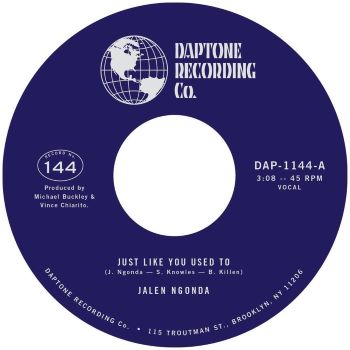 JALEN NGONDA is a new and hotly tipped member of the famed Daptone stable of stars. We’ve learned that Jalen grew up just outside of Washington D.C. where his father introduced him to all things soul and Motown. Jalen is now based in London, having studied the musical arts in Liverpool at the famed Paul McCartney-funded  Institute for Performing Arts (other graduates include Andy Platts of Mama Gun by the way). In 2018 at the Montreux Jazz Festival, Jalen was voted top emerging star and it’s clear that the judge’s verdict  was spot on if you go by the evidence of the quality of his debut Daptone single.

The A side ‘Just Like You Used To’ is a thing of contemporary soul beauty. It’s one  of those “retrophile” sounds, currently so very popular and young Jalen delivers with a commitment and passion that defies his age. His   soulful  vocal soars above a retro flavoured track which features a sweet  and lovely horn solo. Quite lovely. The disc’s putative B side is ‘What A Difference’ – a real, old school throwback with a flavour of those  wonderful early Smokey and the Miracles tunes. It’s  lush and lovely.

We believes that both tracks are good to go now digitally with vinyl to follow in October. Do check ‘em out. They’re good ‘uns!