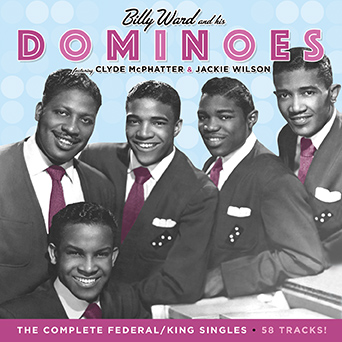 BILLY WARD’S DOMINOES are one of black music’s all-time great vocal groups… right up there in importance and long-term influence with the Drifters, the Temptations and The Impressions. Sadly though, unlike those other three great groups, there has never been a classic compilation of the Dominoes very best, seminal recordings.

Real Gone Music has just rectified the situation with a new 2CD, 58 track collection of the group’s complete recordings for the Federal and King labels. It includes all but one of the group’s hits and contains a number of songs that have never been available on CD before.

Savannah-born Ward (born Robert Williams) was a child music prodigy and after military service in 1950 he decided to form a vocal group to cash in on the emerging popularity of the genre. The first group were called the Ques but after being signed to Federal/King the name was changed to The Dominoes (Ward, by the way was their pianist/arranger and undoubted leader)

The group enjoyed a healthy run of hits through the 50s… the earliest featuring the remarkable Clyde McPhatter and many of the later ones with a certain Jackie Wilson on lead. Yes, like many early vocal groups, the personnel was ever changing and Ward ran his outfit with a tough, military precision… cross him and you were out!

BILLY WARD AND HIS DOMINOES’ ‘THE COMPLETE FEDERAL/KING SINGLES’ IS OUT NOW ON REAL GONE MUSIC.