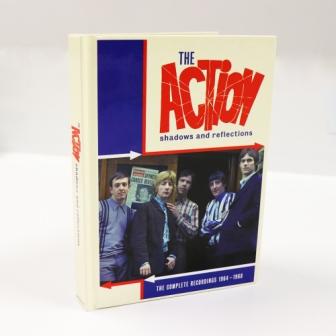 Ironically, though, the Action had begun in the early 60s as the Boys, and their first forays into the music biz were as backing band for cabaret singer, Sandra Barry but they were soon bitten by the soul bug. Ditching Ms Barry and with a new, zippier name, The Action were soon packing clubs in their own right with their sets stuffed with covers of songs from the Motown greats and Curtis Mayfield. The Action’s underground reputation brought them to the attention of Beatles’ producer, George Martin, who signed them to his Air Production Company. With Martin in the producer’s chair, the Action issued five singles on the Parlophone label, but, amazingly, none enjoyed any measure of success.

Over the years those five singles have become hugely collectable and the Action have assumed an almost mythical status, with collectors and fans knowing that beyond those singles, there had to be many more Action recordings out there.

Now Cherry Red, imprint Grapefruit comes to the rescue with an ab fab, four CD, 86 track box set that brings together everything the Action recorded in their 60s pomp – ’64- ’68. Included, of course are the ten sides of those Parlophone singles, but you also get stereo mixes of ’em, rare outtakes, demos, BBC live sessions and what have become known as “the lost recordings” – a George Martin never released album.

Over the 86 tracks you can hear the band’s evolution. The three included Boys’ tracks are standard 60s beat fare, but then, as The Action you can hear incendiary and loving versions of classics like ‘Land Of 1,000 Dances’, ‘Harlem Shuffle’, ‘Girl Why You Wanna Make Me Blue’ and the two Action highlights –their takes on the Marvelettes ‘ ‘I’ll Keep On Holding On’ and Martha and the Vandellas’ ‘In My Lonely Room’.

Like most 60s bands, as the decade moved on, the Action’s sound evolved. They flirted with harmonic psychedelia (let’s blame the Beatles!) but even things like ‘Dustbin Full Of Rubbish’ and ‘Climbing Up The Wall’, have their own charm and Reg King’s vocals always retain a soulful edge.

All the 60s action on the Action is here and though the band eventually imploded they left a mighty legacy. In the late 90s they briefly reformed and there’s a live album from that time doing the rounds. Recorded at London’s Boston Arms venue, it sees the group back to in their soulful stride with versions of stuff like ‘The Monkey Time’, ‘Heatwave’ and ‘Ooh Baby Baby’. But it was the 60s that represented what the Action were all about and ‘Shadows And Reflections – the Complete Recordings 1964 – 1968’ definitively proves that.

THE ACTION; ‘Shadows And Reflections – the Complete Recordings 1964 – 1968’ is out now on Grapefruit.