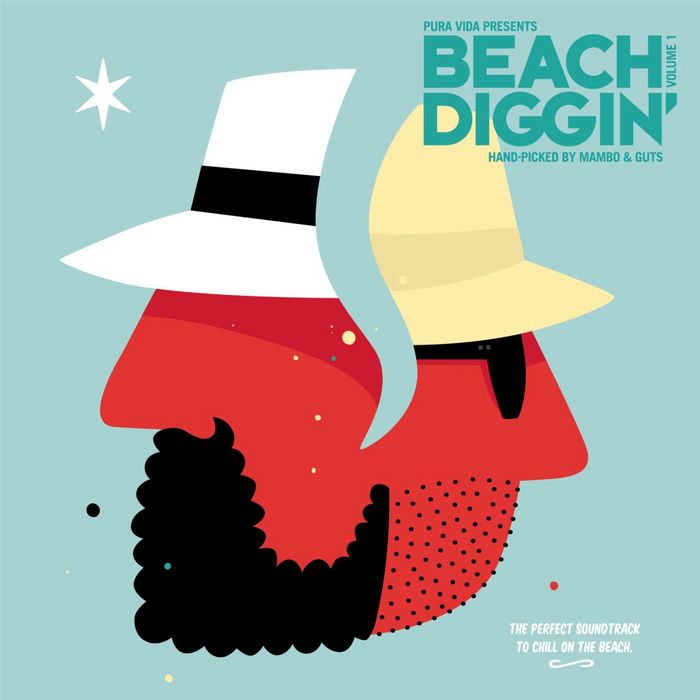 With Summer now a–knocking, maybe you’re looking for the perfectly formed but intriguingly eclectic Summer playlist. Yes? Then you could do worse than check out ‘Beach Diggin” … a new 16 tracker on the Heavenly Sweetness label.

The compilation’s been put together by GUTS – a French music producer now resident on Ibiza and MAMBO – a Los Angeles painter. Between them they’ve dug deep into their old vinyl crates and come up with a heady cocktail of bossa nova, samba, soul, funk, reggae, salsa, socca and much, much more. It’s all obscure and collectable – hip without being elitist.

No one single track stands out ; the album is meant to flow with a seamless Summer ambience… and it does. Amongst the ear worms ,though, is a lovely ‘Gimme Love’ from the NELSON FAMILY. Recorded in Trinidad in 1981, it’s an irresistible mix of New York disco and Caribbean beaches. It perfectly sums up the mood of the album – as too does JOE CRUZ and the CRUZETTE’S version of ‘Love Song’ (the original is DIONNE WARWICK’S). This is a laid back Brazilian delight and anoraks will be delighted to know that the lead singer is the lovely ELZA SOARES – sometime wife of Brazilian soccer god, GARRINCHA. Elsewhere, the naive seduction of TALYA FERRO’S ‘Cuando Caliente El Sol’ is timeless; WILLIE LINDO’S Jamaican, largely instrumental version of BARRY WHITE’S ‘Midnight’ is every bit as sensual as the original; while if you just want a gentle beach side dance groove go straight to AUGUSTIN PEREYRA’S ‘Guayabas’. Recorded in Spain in 1976, it features a fabulously simple Fender solo.

BEACH DIGGIN’ compiled by GUTS AND MAMBO is out now on Heavenly Sweetness records.