LETTING THE DOGS OUT! 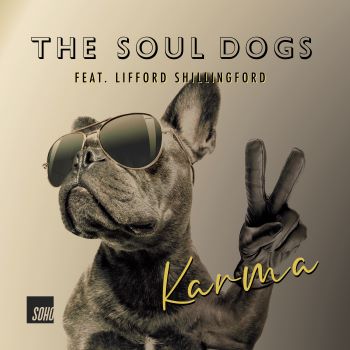 THE SOUL DOGS are a new London music collective marshalled by songwriter and producer Tim Shoben. Tim’s idea behind the  band is to blend the flavours of blues, soul and Motown into compelling, contemporary narratives on subjects as varied and complex as climate change, depression  and even love and romance!

Indeed the band’s first single, ‘Karma’ deals with the very serious and ever present  issue of knife crime. The cut is chilling with hard hitting lyrics – “young blood flows  like mother’s tears” with the underling theme being that carrying  a knife doesn’t make you someone to “look up to”. The track’s electro bluesy soundscape adds real menace to ‘Karma’. It’s out now.

Sneak previews of the band’s upcoming eponymous LP reveals there’s plenty more food for thought. For instance, ‘Get Ready For The Storm’, another rocky, blues-tinged outing, deals with climate  change, ‘Black Dog’ tackles depression while  you should be well aware of the didactic message in Sam Cooke’s classic ‘A Change Is Gonna Come’. The Soul Dogs do a wonderfully convincing job on this oft-covered tune.

For some lightness (though that’s not quite the right word), ‘Still You Babe’ is a love song – albeit a song about lost love. Listen up too to the album opener, ‘Song Of Surrender’ – a track that best sums up the sound of the band – a captivating mix of blues, soul and Motown; it’s a passionate sound.

Much of the passion is  down to the powerful vocals of UK soul man Lifford Shillingford (TV viewers will know he’s been a finalist on both ‘Britain’s Got Talent’ and ‘The Voice’). His soulful energy is one part of the dynamic driving the Soul Dogs forward. He’s backed by an ensemble of key players which includes pianist & producer Nathan Britton. Britton runs a label at Soho Live Studios – the production arm of SohoLive Music Club, a new music system which provides live performance opportunities as well as artist and production development leading to releases, sync placements, and further major recording contracts.

In the meantime, do investigate the Soul Dogs. They  craft a unique sound  that’s not classic soul but it intrigues and provokes and has its own very British vibe.