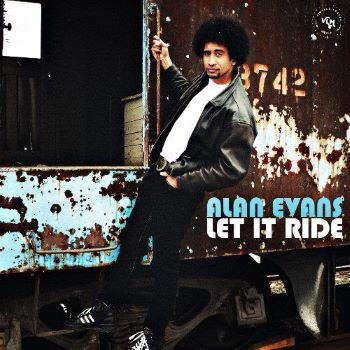 Music multi-tasker, ALAN EVANS is a man of many guises. Essentially, he’s a rather fine drummer but to stop there would be to hide his considerable light under a bushel. Over the years followers of the more esoteric end of the soul/jazz/funk genre will have comes across Mr E in all kinds of ways. He’s actually a multi- instrumentalist /songwriter /studio engineer and producer. Maybe his best-known outlet is Soulive (he was a founder member), he’s also 1/3 of the Alan Evans Trio and in 2020 he debuted with his Crushed Velvet and the Velveteers project… a group that peddled raw funk. Later that year he surfaced with 7 Day Weekend who craft a sound which they call “electrorganic” – a music inspired by 60s and 70s film music.

Now Alan’s people are giving us the opportunity to wind back his career some 17 years – a time when he was simply “Alan Evans’. In 2004 our man recorded a solo album, ‘Let It Ride’ which for reasons never best explained was only ever released on CD in Japan. You’ve probably guessed it’s now “much sought after” so Vintage League Music have decided to reissue it digitally.

The album is a 13 tracker (the last three tracks are live versions of three of the previous included studio cuts) and everything was written by Evans who plays drums and synths throughout alongside “all-star” guests who aren’t credited (at least on my copy).

Sonically ‘Let It Ride’ is mainly prime time funk. Some of the inclusions echo the sparse funk of New Orleans (like the opener, ‘Do It Again’); some are more full on in the mode of James Brown (try ‘Break It Down’); some are slinkier than others (try ‘Hot N Greasy’) some feature vocals – sometimes chanted, sometimes semi spoken); some feature vocoders; others offer rocky guitar breaks.

There are a few exceptions to the funk rule. ‘Welcome To The World’ could maybe be best described as lounge jazz with a bit of substance. The vocal is hushed and semi spoken and I’m not sure if it’s serious or tongue in cheek. Then there’s the low-down jazzy meander (complete with rocky guitar) that is ‘Low Down Low’. Apart from that it’s really funk all the way and if you’re a funkateer ‘Let It Ride’ is available now on Vintage League Music.