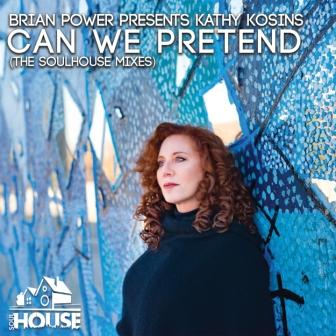 Back in January we reviewed the excellent ‘Uncovered Soul’ album from Detroit’s KATHY KOSINS. The album lived up to the expectations that had been raised by the earlier singles that had been lifted from the long player over the previous months.

Over a similar time span we’ve tracked the career of UK DJ/producer/ entrepreneur BRIAN POWER and his SOULHOUSE label. The label’s recent compilation, by the way, has been one the fastest selling soul sets of recent years with the first pressing selling out!

So you can guess that when Ms K and Mr P get to work together, the end result will be something special… and it is! Brian has just remixed one of the key cuts on ‘Uncovered Soul’. It Kathy’s cover of the Bill Withers’ tune ‘Can We Pretend’ (written by his then wife Denise Nicholas).

In its original Kosins incarnation, ‘Can We Pretend’ was a melancholy jazz meander with producer Kamau Kenyatta’s piano weaving in and out of the vocal. Brian Power re-imagines the whole thing and creates two, light soulful house mixes…. “laid back” and “club”. Neither is too frantic and he wisely retains the jazzy undertow. There’s a third new mix – a “pop” version which is nearer to the original take in tempo and aimed squarely at the sophisticated radio playlisters.

‘Can We Pretend’ is out very soon; ‘Uncovered Soul’ is out now and Kathy will be appearing live on April 17th at Piazza Express’ Chelsea Pheasantry.