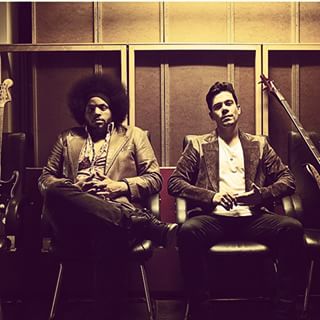 PAR-LE are a UK soul duo comprising MILES JAMES and ALEX BONFANTI. The pair are seasoned sessioneers who’ve come together through a mutual love of 70s and 80s soul and their debut EP, ‘THE LIGHT YEARS’ wears that influence proudly. Listen to the concise 6 tracker and you’ll hear shades of all that era’s greats, though the polished production and stylish songs owe a lot to one giant of the business…. Quincy Jones, the duo’s number one hero!

Working with vocalists Ade Omotayo and Michael Kiwanuka, Par-Le have crafted a soothing, serene and soulful soundscape beginning with the short, enveloping, harmonic ‘Take My Hand’. More a sketch than a song, its crystalline production sets the tone for what’s to come.

‘Exclusive’, the second cut, is a modern soul gem. Laid back, it has the same kind of contemporary/retro mix that Cool Million specialise in. ‘Kamden Town’ (their spelling, not mine!) has an 80s electro feel to it and for reasons not just connected with the title it reminds me of Light Of The World’s ‘London Town’. It has the same kind of vibe.

Elsewhere, ‘Leave Me Wanting’ is a shimmering ballad; ‘Shake and Break’ rides a bumpy groove while ‘Light’ concludes affairs with a return to the soporific.

PAR-LE’S ‘THE LIGHT YEARS is released on MOVEMENT RECORDS on July 24th.