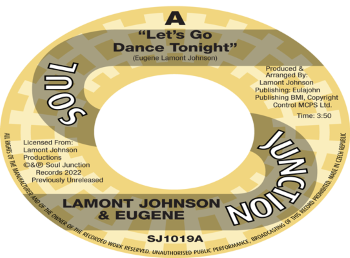 Born in Highland Park, Michigan, Johnson has a cult following within the music community. He was, you see, a pioneer of the fretless bass and as such his skills (both as a player and teacher) have long been in demand.

He began his career playing sessions in and around Detroit and eventually became a member of Brainstorm – best known for their 1977 Tabu album, ‘Stormin’’. The album featured vocalist Belita Woods and collectors will point to tunes like ‘Loving Is Really My Game’, ‘Wake Up and Be Somebody’ and ‘This Must Be Heaven’ as highlights.  The following year Lamont quit the band and went back to sessions and in 1978 he released his own LP, ‘Music Of The Sun”.

The in-demand bassist then went on to work with Chapter 8 and Nightflyte whilst working on a second solo album. That album, recorded under the auspices of Tabu, never won a release though the label did issue two singles including the modern soul favorite ‘Masta Luva’. Latterly Lamont has worked with Was Not Was and released a couple more solo sets – ‘This Must Be Heaven’ and “Amore’ Dance – both on his own Allee label.

The two tracks on the new Soul Junction 7” are credited to “Lamont Johnson & Eugene” and you might assume that “Eugene” is maybe the singer. Indeed, the disc’s A side ‘Let’s Go Dance Tonight’ features a male vocal but on the B side, ‘Burnin’ For Love’, the lead voice is female. Confused? Well, the writing credits on both songs are down to “Eugene Lamont Johnson” which is, in fact, the bassist’s full name! Also, the provenance of both cuts isn’t that clear. But let’s be honest – none of that really matters. It’s what’s in the grooves that counts! And here we have two fine modern soul cuts!

‘Let’s Go Dance Tonight’ has  a lovely, old school, optimistic 90s feel. The baritone vocal has a lovely world-weary flavour and is supported by sweet femme BVs and a great honking sax break. My guess is that the voice is Lamont’s!  However, the super soul sleuths at Soul Junction tell me that the singer is a “mystery” guest. Lamont Johnson and Eugene is the collective’s name and Lamont, obviously, is the project leader. Ditto on ‘Burnin’ For Love’ which has an electro/synth sound that harks back to the 80s and the anonymous lady singer sure sounds on fire. You can probably guess that both tracks ride deep and heavy bass lines. Great stuff!