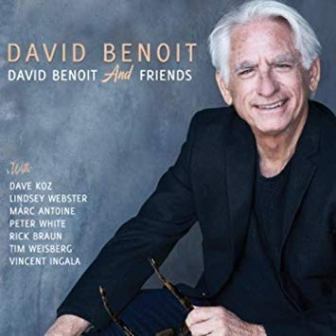 Amongst the collaborators on the 11 tracker are Dave Koz, Peter White, Marc Antoine and Lindsey Webster. The lovely Lindsey fronts the album’s big vocal – a gentle ‘Make It Real’… a gentle smooth jazz builder with a touch of Latin shuffle about it. ‘Feel It Still’ is another album highlight. Very different, it recalls those great soul jazz albums of the 60s from people like the Ramsey Lewis Trio. ‘Sly Fox’ has a touch of the Lewis’s about it too –though, in this case. latter period.

The album also sees David offer homages to several more of his heroes. ‘Dave G’ is a tribute to Dave Grusin; a fan of Coldplay, Benoit offers a cover of their ‘Viva La Vida’; ‘The Ballad Of Jane Hawk’ is in honour or writer Dean Koontz – Hawk is his fictitious rogue FBI agent; guitarist Kenny Burrell is the focus on a version of his ‘Moon And Sand’ (Marc Antoine takes the guitar part); while the pianist’s love of Italy is manifest in the cuts ‘Vernazza’ and ‘Sienna Step’ – both classic “Benoit sounds”.

Indeed the whole album is classic Benoit and it’s out 23 August via Shanachie Records.