LET THE SUNSHINE IN… 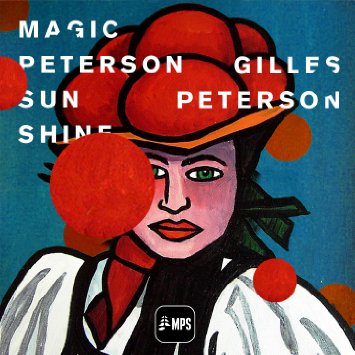 For the album, Gilles was given free access to the MPS back catalogue and he’ chosen a mix of well-known names alongside some less familiar artists. Perhaps the best known musicians are Mark Murphy who offers a swinging ‘Why And How’ and Mary Lou Williams’ whose cut is her moody reading of the Gershwin classic ‘It Ain’t Necessarily So’.

Perhaps the most left field track is ‘Harp Revolution’ from German jazz harpist Jonny Teupen. In between those extremes you can enjoy music from the likes of George Gruntz, The Singers Unlimited, Modern Jazz Group Freiburg, Francy Boland and The Third Wave who feature a cool version of George Duke’s ‘Love Train’. The 16 tracker is topped and tailed by two delicious, chill-out piano pieces – Don Ellis’ all too brief ‘Dew’ and Das Wolfgang Dauner Trio’s cinematic ‘Love In Summer’.

‘Magic Peterson Sunshine’ is released on April 15th on MPS