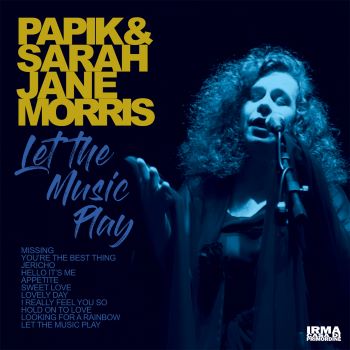 Back in May, the smoother soul world enjoyed a new version of Everything but the Girl’s ‘Missing’ from British soul/jazz singer SARAH JANE MORRIS in tandem with NERIO PAPIK POGGI in his “Papik” guise. If you enjoyed its lazy, laid back vibe, you’ll be delighted to learn that the duo has just released a whole album together – ‘Let The Music Play’.

The 11-track long player is named for the opening track –  a jazzy, Latin-tinged cover of Barry White’s ‘Let The Music Play’. It’s quite gorgeous and you’d be hard pressed to recognize it as the White song! The rest of the album channels  the same summery smooth jazz vibe across a selection of covers and new songs.

The other re-makes include lovely readings of Todd Rundgren’s ‘Hello, It’s Me’ (best known to the soul crowd in the Isley Brothers’ version), Bill Withers’ ‘Lovely Day’, Anita Baker’s ‘Sweet Love’ and the Style Council’s ‘You’re The Best Thing’. Those titles should confirm what we said about the “summery smooth jazz vibe” and the LP’s original songs proffer the same flavour.

Throughout, Papik’s arrangements are cleverly subtle while Ms M’s vocals are perfect for the intended mood. The album’s out now on Irma Records.