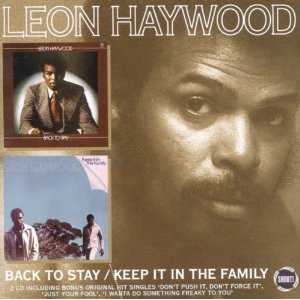 Ware is the soul connoisseurs’ soul man and they’ll tell you that his list of credits is truly impressive. He has worked, written or produced material for Donny Hathaway, The Isley Brothers, George Clinton, Minnie Ripperton, Quincy Jones, Maxwell, Loose Ends, James Ingram and John Martyn amongst others, and of course, it is Ware who takes writing and production credits for Marvin Gaye’s seminal Motown classic, ‘I Want You’ . In addition, his work has been sampled by artists such as Tupac, A Tribe Called Quest, Ice Cube, Mary J Blige and Prince, and for the UK soul fraternity he has written songs for people like Lulu, Mica Paris and Omar.

Ware is also respected for his own solo albums which include the classic 1976 outing ‘Musical Massage’ and the more recent ‘Moon Ride’ which was released on the revitalised Stax imprint.

Leon, of course, has appeared many times in the UK but this will be the first time he’s appeared in an intimate club setting and we’re told we can expect a set brimming with “soulful intimacy that stays true to his highly romantic signature style.”

Ware will be appearing at Ronnie Scott’s on Friday 7th and Saturday 8th March and you can learn more by contacting the cub….. www.ronniescotts.co.uk // 020 7439 0747