LEN BARRY …IN HIS OWN WRITE 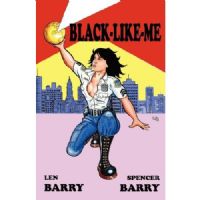 Most people will remember LEN BARRY as the vocalist on one of blue-eyed soul’s most enduring songs – ‘1-2-3’. Before that solo smash, LEN had been a member of the DOVELLS and even before that he worked around the North Philly area leading a group called the BARRYMORES. Since the sixties BARRY has focused on writing and production. He worked with Philadelphia’s legendary WMOT Productions and was responsible for hits like SLICK’S ‘Space Bass’ and FAT LARRY’S ‘Zoom’. Latterly LEN’S turned his hand to writing and his novel ‘Black Like Me’ has just been published in the UK. A collaboration with his son, SPENCER, the book tells the story of a Caucasian brother and sister thrust into living and loving in the ‘hood, and clearly few people are better experienced to write about the ups and owns of that situation than LEN BARRY. His records often led people to assume he was an Afro-American while throughout his career he’s collaborated with artists from right across the spectrum. ‘Black Like Me’ is a great read for anyone interested in soul’s history and its social context. It comes with a perceptive foreword from iconic session man BOBBY ELI and is published by Bank House Media … for more information go to www.bankhousebooks.com or www.lenbarry.com – where you can even listen to and download a soundtrack to the book composed and performed by LEN himself.

Tags: LEN BARRY ...IN HIS OWN WRITE