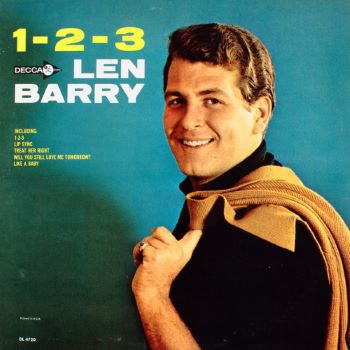 LEN BARRY – one of the first so called “blue-eyed soulsters” – died on Thursday 5th November. He was aged 78 and died of myelodysplasia, a cancer of the bone marrow, at Nazareth Hospital., Philadelphia… his hometown. Len Barry of course is best remembered for his enduring hit ‘1-2-3’ but there was much more to his career than that evergreen.

Barry was born Leonard Borisoff in West Philadelphia and started his music career after stint with the US Coast Guard. His first foray into the business was with the Dovells – a white doo-wop group whose biggest hit was ‘The Bristol Stomp’ and they also enjoyed success with a vocal version of Phil Upchurch’s ‘You Can’t Sit Down’.

In 1965 Barry struck out for a solo career enjoying success with ‘1-2-3’, ‘Like A Baby’ and ‘I Struck It Rich’ – that latter written with Leon Huff. Northern soul fans were particularly fond of his versions of ‘I’ll Always Need You’ and ‘Girl You’re Far Too Young’.

After the hits dried-up Len worked in song writing and production. In 1969 he wrote and produced the hit ‘Keem O Sabe’ credited to The Electric Indian and amongst his other credits are Fat Larry’s ‘Zoom’ and Booker Newberry’s ‘Love Town’. He also worked with Blue Magic, Brandi Wells and Damon Harris’ Impact.

In May 2008, Barry published his first book ‘Black Like Me’ and his second book, ‘Prose and Cons’ is scheduled for publication later this year.

Announcing his passing his long-time friend and publicist, Alan White said “The world has lost a lot of love today’”. Len Barry married Elaine Uniman. They had two children before divorcing. She survives as do his children and two grandchildren.

Tags: LEN BARRY ...IN HIS OWN WRITE