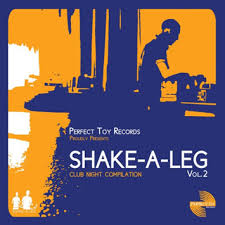 It’s one of Munich’s biggest club nights… Shake-A-Leg . It’s hosted monthly by DJ TOBIAS KIRMAYER and Latin/jazz producer JERKER KLUGE and, as is often the way with these things, there are regular albums to go with the night out.

The KIRMAYER/KLUGE duo have just curated and released their second Shake-A-Leg compilation and the 15 tracker offers quite an eclectic sweep of sounds with nothing obvious and nothing you can ignore! The music is an energized sweep of jazz, Afro beat, Latin, hip-hop, funk and that strange hybrid hip-hop/jazz, represented here by JACKNIFE LEE’S loping ‘Hey Kitty Kitty’ . Essentially a take on classic soul-jazz, the tune hits you right between the ears. There’s authentic soul-jazz in the form of CHARLES EARLAND’S ‘The Mighty Burner’ while the DIZZY GILLESPIE/LALO SCHIFRIN collaboration, ‘Unicorn’ is well-worth its inclusion.

The set also boasts a mighty Latin version of ‘Sunny’ courtesy of PUCHO & HIS LATIN SOUL BROTHERS while the other big Latin tune is WILLIS JACKSON’S ‘Jive Samba’. There’s also a great, off-kilter version of BOB MARLEY’S ‘Stand Up’ from RADIO UTOPIA featuring the vocals of BAJKA while the collective of THE MIGHTY MOCAMBOS (featuring AFRIKA BAMBAATAA, CHARLIE FUNK and KING KAMONZI) keep the intelligent hip-hop flag flying with ‘Zulu Walk’. TOMMY DARK’S ‘Wobble Legs’ is proper funk while the concluding ‘Coincidence of Circumstance’ from DEEP JAZZ will keep the jazz dancers happy.

‘Shake-A Leg Volume 2’ is out now on Perfect Toy Records and you can find out more @ www.perfecttoy.de