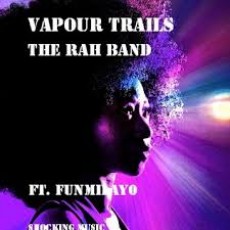 Remember 80s outfit the RAH BAND? The “band” were put together by Richard Hewson as an escape route from being an orchestral arranger for all kinds of artists ranging from the Beatles (‘The Long And Winding Road’), Diana Ross (‘Baby It’s Me’) , Leo Sayer (‘Thunder In My Heart’) to Carly Simon (‘Nobody Does It Better’).

Wanting to write and produce his own songs he started dabbling in recording himself playing guitar (he began his music career as a jazz guitarist) bass and keyboards. The result of this “one man bedroom band” was ‘The Crunch’ which became a massive club crossover hit worldwide. The Rah Band went on to have many more club hits – including ‘Perfumed Garden’, ‘Sam The Samba Man’ and ‘Messages From The Stars’….. all stamped with a quirky electro sound that was unusually captivating.

Hewson now thinks the time is right to resurrect the Rah Band and he’s just issued a new single on them. It’s another spacey, ultra quirky item called ‘Vapour Trails’ and it features the remarkable voice of West African singer Funmilayo, who’s already built quiet a reputation on the London club scene. She brings an aloof coolness to the tune which is stuffed with all the Rah Band’s trademark sounds.

As you can imagine the tune comes in a plethora or mixes of which the Eddie G Radio Edit is the most accessible… the usual download portals will allow further investigation.