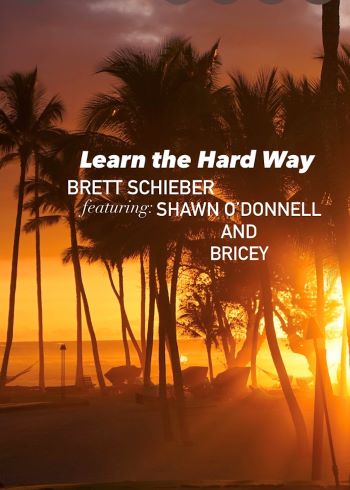 BRETT SCHIEBER is a musician/songwriter/producer who works out of Atlanta. He’s been making music since his teens and his sound crosses and embraces all kinds of genres. For example, much of his work is acoustic while he’s also one half of a trip-hop/art-pop duo called Arcanum. If that’s not enough, Brett writes and produces educational music for children under the name of Mark D, Pencil and Friends and he also  finds the time to play sessions – mainly with soul/R&B/hip hop acts.

In between all that Mr S is currently very busy promoting his own latest single – a (mainly) blue-eyed soul affair called ‘Learn The Hard Way’. In truth it veers towards the poppier end of that genre but is  given some extra heft via a rap from Bricey. Singer on the track is Shawn O’Donnell, a Californian alt rock vocalist. The  mix of rap with a sort of Hall and Oates vibe is odd… but it sort of works!

Were told that ‘Learn The Hard Way’ is from Brett’s upcoming album, ‘Rock And Soul’, which on the strength of this single should prove interesting.