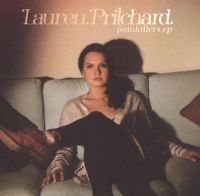 Born in Jackson, Tennessee, but based in London, LAUREN PRITCHARD has just released her second EP – ‘Painkillers’, a four tracker which is set to consolidate the reputation which her first set created. The title cut is self-penned, but was produced by EG WHITE and it has all the best features of ADELE’S ‘Chasing Pavements’ and DUFFY’S ‘Warwick Avenue’ – WHITE, of course, was involved in both. The original version of ‘Painkillers’ is ultra radio friendly; the ‘Body Language Mix’ is a touch chillier, while the ‘Flotilla Remix’ is a lot looser. All three, plus the country-soul ballad ‘Try A Little Harder’ show why PAUL WELLER was so impressed with LAUREN’S voice that the invited her to duet with him on a version of ‘Howe Sweet It Is’ for his Radio 2 In Concert Show. If you missed the broadcast, catch the cut as the B-side to WELLER’S new single. In the meantime LAUREN PRITCHARD’S ‘Painkillers’ EP is available via all the usual outlets.