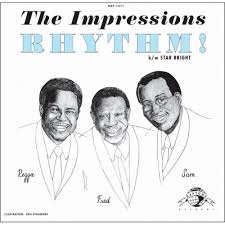 Best soul news of the last month or so is the release of a brand new single on the legendary IMPRESSIONS.

Last year we reported that the iconic Chicago group were working with Daptone Records on a new album… well, as all true soul fans know, the wheels of the recording industry tend to grind slowly and it’s only last month that the first fruits of that relationship became available – a new single.

The A side of the record is a fabulous re-working of Major Lance’s ‘Rhythm’. Curtis Mayfield penned the song for his protégé back in 1964 and no more authentic slice of easy-rolling Chicago soul could you find. The Impressions’ new version stays true to the original – and you’d expect nothing less when you learn that Johnny Pate (The Impressions’ 60s producer/arranger) handled the new arrangement. Original Impressions – Fred Cash and Sam Gooden – are in best harmonic form while “new” boy Reggie Torrian (he’s only been with the Imps since the early ’70s!) handles the delicate lead with aplomb. Moreover, there are no cheesy synthetic instruments or tryin-to-stay-contemporary ‘beats’ here. This is real soul music played and sung by a real band.

The B-side is a new song called ‘Star Bright’. Written and produced by Daptone studio guitarist Binky Griptite, it’s built on the rhythm pattern of ‘Keep On Pushing’ and garnished with hints of the melody lines from songs like ‘Woman’s Got Soul’ and ‘You Must Believe Me’… and it goes without saying that the harmonies are superb throughout. Now, what about that album?

THE IMPRESSIONS ‘RHYTHM’/ ‘STAR BRIGHT’ is available as a 7″ vinyl single from Daptone and as a download from all the usual internet portals.