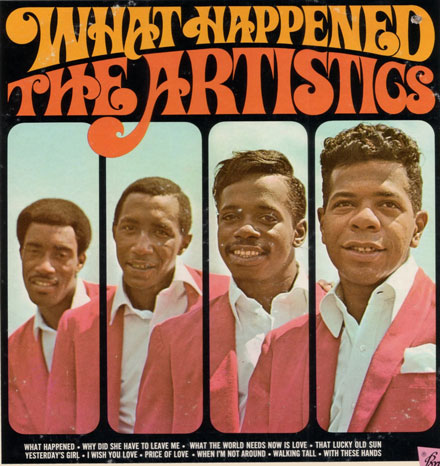 Various internet sites are reporting the death of LARRY JOHNSON… a founding member of Chicago soul group, THE ARTISTICS. Unfortunately no details of Larry’s passing are available.

The Artistcs were formed at Chicago’s Marshall High School in 1958 and originally comprised Curt Thomas, Jesse Bolian, Aaron Floyd and Larry Johnson who was first tenor. In 1960 the youngsters sang at the Democratic National Convention in Chicago; then in 1963 they had their first break when Major Lance asked them to sing bvs on his ‘Monkey Time’. On the strength of that, Lance’s manager, the redoubtable Carl Davis, signed the Artistics to Okeh, where they debuted with ‘I Need Your Love’ featuring a new lead singer, Robert Dobyne.

Dobyne was soon replaced by Charles Davis (from the Dukays) who was then replaced by Marvin Smith from the El Dorados. Fronted by Smith, the Artistics enjoyed a local hit with their cover of Marvin Gaye’s ‘Get Mt Hands On Some Lovin”, though their most successful Okeh single was ‘This Heart Of Mine’ (a Barrett Strong song).

In 1966 the Artistics moved over to Carl Davis’ newest project – the revitalised Brunswick label. There they immediately scored a hit with the ever-lovely ‘I’m Gonna Miss You’ – a classic example of mid 60s Chicago soul. The song was a million seller and elevated the group to a new status which was to cause internal problems. Smith left for a solo career being replaced by Tommy Green while bassist Bernard Reed also joined the ranks – ostensibly to help sort out the group’s stage shows. The Artistics never capitalised on the success of ‘I’m Gonna Miss You’ though their ‘Girl I Need You’ was another modest hit for Brunswick. The group quit the label in 1973 and soon disbanded.