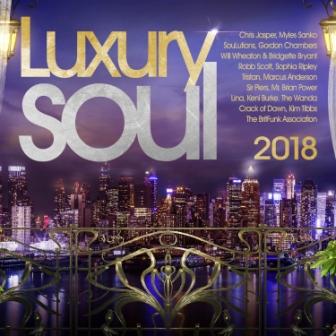 The annual Expansion Records sponsored LUXURY SOUL WEEKENDER is good to go in a few days time – 5th to the 7th January to be precise and at its regular home – the Blackpool Hilton Hotel. This year’s bonanza feature Keni Burke, Shirley Jones and Linda Clifford (amongst others) performing alongside a line up of top DJs from across the whole soul spectrum.

As ever, to tie in with the event, Expansion will be releasing their annual ‘Luxury Soul’ compilation and this year’s edition is particularly strong featuring the very best new and in-demand soul cuts along with some mighty tasty oldies.

Amongst those oldies are ‘So Emotional’ from Kashif, ‘If You Don’t Start Nothing’ from The Jones Girls, ‘Heartbeat’ from Leon Ware and everyone’s fave – ‘Galveston Bay’ from Lonnie Hill. As ever, though, it’s the new stuff that provokes the real interest and amongst the exciting fresh tunes is ‘Stand Strong Stand Tall’ from the Brit Funk Association (a review of their exciting album coming very soon) and ‘Negative Pleasures’ from hotly tipped UK soul man Rob Scott. The tune is a sultry modern soul groove that features svelte vocals from Sylvia Mason; it bodes well for the parent album – ‘Siren’ available via Expansion in March.