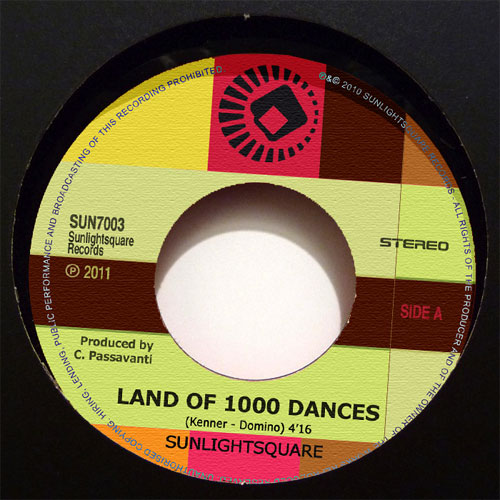 ‘Land Of 1,000 Dances’ is one of soul music’s greatest vintage war horses. Written and originally recorded by New Orleans’ CHRIS KENNER in 1963 it was revived magnificently by CANNIBAL AND THE HEADHUNTERS in ’66. The best known version though is WILSON PICKETT’S. Immaculately produced by JERRY WEXLER, it achieved a kind of iconic status when used as one of the theme tunes to the legendary ‘Ready Steady Go’ TV show.

Since then the song’s been revised, revisited and resurrected countless times. The latest version comes from SUNLIGHTSQUARE – a big band (25 personnel and counting!) who work in and around the London jazz scene. Led by Italian pianist CLAUDIO PASSAVANTI, they’re set to release their third album – ‘Britannia Shing-A-Ling’ – and as a taster, their label (Sunlightsquare Records), will release the band’s version of ‘Land Of A 1,000 Dances’ as a single. Using no more technology than that was available in the 70s, the track is a huge melting pot of Latin rhythms, brass stabs and driving keys – all topped off with a frenzied trumpet solo and a controlled vocal from BRENDAN REILLY (he of BASEMENT JAXX fame)

SUNLIGHT SQUARE’S ‘LAND OF 1,000 DANCES’ IS RELEASED ON APRIL 4TH….. NEWS OF THE ALBUM TO FOLLOW.