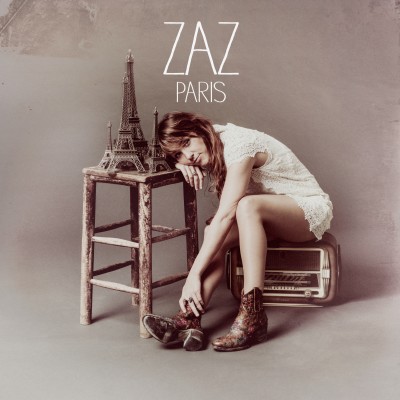 In her native France, ZAZ (Isabelle Geffory) is a super star chanteuse. Her first two albums have sold over three million copies and her sell-out 2014 tour played to over 1.5 million fans. About time then for the rest of us to catch up with her and who better to champion that getting to know process than a certain Quincy Jones!

The legendary Q says of Zaz, “She has real blues roots in her voice that you’d swear came straight out of the ghetto” and putting his money where his mouth is, Quincy’s gone on to collaborate with Zaz on her brand-new album.

‘Paris’ – Zaz’s third long player – is an unashamed homage to the City Of Light and Quincy Jones takes the producer’s chair for three tracks – the jaunty ‘Champs Elyssees’, the gentler ‘I Love Paris’ (a duet with Nikki Yanofsky) and the French standard ‘J’aime Paris Au Mois De Mai, ‘ on which Zaz is joined by French icon, Charles Aznavour. Jones imbues all three with his signature swagger but they’re not the only goodies on offer. ‘J’ai Deux Amours’ is a great poppy, foot tapper and there’s a heartfelt version of Edith Piaf’s ‘Sous Le Ciel De Paris’ too but dip in anywhere to enjoy a slice of French romanticism, garnished with a little soul, a touch of swing and lashings of big band jazz.

ZAZ: ‘Paris’ is released on East West Records on May 4th.