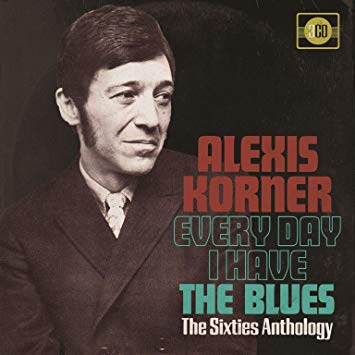 It’s for good reason that ALEXIS KORNER is known as the Godfather of British blues. If you take issue with that then a quick listen to this new 3 CD box set from Grapefruit Records, ‘EVERYDAY I HAVE THE BLUES … THE 60s ANTHOLOGY’ will put you right.

Born in London in 1928 to an Austrian Jewish father and Greek mother, Korner wasn’t a virtuoso musician, he himself said that he was an “appalling singer”, he couldn’t read music and he didn’t write too many enduring songs but almost singlehandedly he inspired the British blues boom of the late 50/early 60s and, a kind of catalyst, he inspired a whole generation of young musicians to go on to bigger and better things – amongst them a group of young lads who called themselves The Rolling Stones… whatever happened to them!

‘Everyday I have The Blues’ offers a generous 66 tracks tracing Korner’s 60s musical odyssey. Obviously It begins with his early work that sees him emerge from the 50s Brit skiffle scene to put together a legendary band that was in the vanguard of the 60s blues onslaught. That band, Alexis Korner’s Blues Incorporated, cut two legendary albums… ‘Live At The Marquee’ and ‘Live the Cavern’ and there’s a generous selection of tracks from those albums – including the band’s incendiary version of blues standards like ‘I Got My Mojo Working’ and ‘Rain Is Such A Lonesome Sound’ . The band on those albums featured a phalanx of big names – people like Jack Bruce, Cyril Davis, Dick Heckstall Smith, Charlie Watts and singer Long John Baldry. Amongst other vocalists who worked with Korner are Herbie Goins, Mick Jagger and Robert Plant.

As the 60s evolved so too did Korner’s music. Though always blues-based, it became rockier and more experimental but he never let a god song get past him. Here you can enjoy Korner versions of stuff like Curtis Mayfield’s ‘Mighty Mighty Spade And Whitey’ and William Bell’s ‘You Don’t Miss Your Water’.

‘EVERYDAY I HAVE THE BLUES … THE 60s ANTHOLOGY’ includes rare Korner singles, studio outtakes and is packaged in an elegant little box with a lengthy essay and scores of archive photos that prove, beyond doubt, that Alexis Korner indeed was Godfather of British blues.