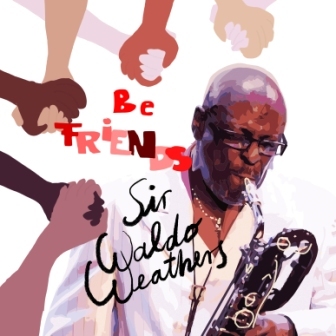 The magnificently named SIR WALDO WEATHERS is a sax man from the home of Mohammed Ali – Louisville. He has a most peculiar but varied CV. For instance, Waldo is the only black sax man in the Country Hall of Fame – an honour no doubt stemming from his work with country legend Charley Pride. His lordship has also worked with people like Phil Collins and blues man Johnny Taylor. But Waldo’s most famous association is with James Brown. He joined the Godfather’s band in 1992 and stayed for 15 years playing with JB live and in the studio.

At the moment Waldo works out of Stuttgart, Germany where he’s a big draw on the live circuit – busy now promoting his solo LP – ‘Be Friends’. The concise ten tracker, like the man’s CV, is very varied. The first two cuts – ‘Our Day Will Come’ (no, not the Ruby and the Romantics classic) and the album title cut seem to be inspired by Chic. They both boast danceable beats and the distinctive Nile Rodgers guitar sound… though the vocals make the end product a little rough round the edges. Waldo pays homage to his old boss on ‘Do The Waldo’ (complete with JB samples) while on the intro to ‘The Message’ he channels the sound of Barry White. On the rousing instrumental, ‘Life’, Sir W gets to show off his sax skills while elsewhere there are slow meanders like ‘Weekend’ which add variety to the set which, though not polished and air brushed like most modern soul, is tough, rough and peculiarly honest in its sound.