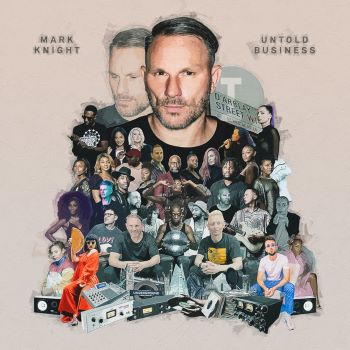 MARK KNIGHT is an acclaimed UK DJ, producer and label owner. We’re reliably informed that  young Mr K is the  second highest-selling artist on Beatport (the US based on-line dance store). He is of course head honcho at Toolroom Records and that was the source of his April chart rider, ‘Everything’s Gonna Be Alright’. The gospel flavoured tune featured the London Community Gospel Choir while the lead vocal was taken by a certain Beverly Knight, who of course, started her music career in the Pentecostal Gospel tradition. It was a powerful message of positivity, solidarity and hope that (no coincidence) echoed the sounds of the Sounds of Blackness in their pomp!

We were told that ‘Everything’s Gonna Be Alright’ heralded  a full album and, voila – it’s just been released,  and that particular tune is the one that kicks off the 13 tracker that is ‘Untold Business’. Our Bev’s not the only “name” helping Mark deliver his classy 70s and 80s tinged spin on the soulful house genre. Also featured on ‘Untold Business’ are people like Michael Gray, Robert Owens, Shingai (from the Noisettes), Gene Farris, Rene Amesz and Tasty Lopez. These last two feature on ‘All 4 Love’ – a swirling sweep which became firmly lodged on BBCR1 for 6 weeks. Right now, we’re loving ‘Untold Business’ (the title cut) – a semi-spoken/rapped piece that owes more than a little to Teena Marie’s 1981 ‘Square Biz’ – underlining just where Mark’s coming from with this album. It’s good to go now via Toolroom.