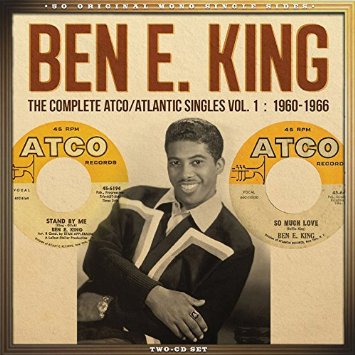 The sad passing of BEN E KING in April of this year didn’t bring the usual plethora of reissues and/or hits compilations and given King’s status as one of soul real grandees there still aren’t that many definitive collections or retrospectives on him.

Now Real Gone Music (in collaboration with Rhino and SoulMusic Records) start to remedy that situation with this wonderful 2 CD, 50 track set that pulls together all the A and B sides of the great man’s Atco/Atlantic singles released between 1960-1966.

King (born Benjamin Earl Solomon in 1938), of course, made his name as lead singer with the Drifters but his personal manager, Lover Paterson, knew there were bigger bucks to be made from a solo career, so in May 1960 they inked a soul deal with the Atlantic imprint, Atco.

King’s first single flopped. Even a duet with the label’s star female voice, LaVern Baker, failed to have any impact. Then in October ’60 New York radio jocks began to flip King’s third single, ‘First Tatse Of Love’ and the song, ‘Spanish Harlem’ flew up the charts. More hits followed including the 24 carat classic ‘Stand By Me’, ‘Don’t Play That Song’ and the re-write of the Italian hit ‘I (Who Have Nothing)’. Paterson and Atco even managed to get King to cross over into the lucrative, white middle class market with singles like ‘Amor’ and a version of ‘I Could Have Danced All Night’.

All those great songs are included here, of course, along with dozens less familiar that slipped though the net. But familiar or not every tune is stamped with King’s distinctive sound… one of the most recognizable baritone voices in soul’s history.

The collection comes complete with sleeve notes from UK writer Clive Richardson who offers an accurate summation. He does, however, miss one very important point – the impact that Ben E King had on a young generation of British beat groups in the early 60s. Most Merseybeat groups featured a King song or two in their repertoires… I can remember countless band bashing out their versions of ‘First Taste Of Love’, ‘Amor’ and Ecstasy’ and a certain John Lennon always maintained that ‘Stand By Me’ was not only one of the greatest ever singles but one of the key songs that really influenced him. Lennon even recorded his own version on his solo ‘Rock n Roll’ long player.

Sadly there’s no mention of a second volume of Ben’s Atco/Atlantic singles. He stayed with the label till the end of the 60s and returned in 1975, so there’ still a lot in the can, including his wonderful album with the Average White Band. Let’s hope the Real Gone boys work on that lot for us!