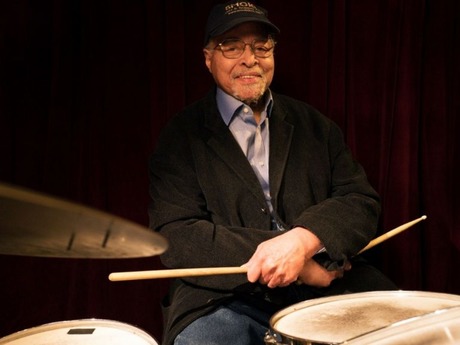 Jimmy Cobb, the last surviving member of the Miles Davis group that recorded the iconic jazz album, ‘Kind Of Blue,’ in 1959, has died aged 91 from lung cancer.

Born in Washington DC, Cobb began his career in 1950 playing the drums behind R&B saxophonist, Earl Bostic By the time he joined Miles Davis’s band in 1957, he had accrued experience playing with singers Dinah Washington and Billie Holiday and instrumentalists, Dizzy Gillespie and Cannonball Adderley. Miles recruited him on Adderley’s recommendation after he had to fire  Philly Joe Jones for drug addiction. “I knew I was going to miss Philly, but I knew I was going to like Jimmy, too,” wrote the trumpeter in his memoir Miles: The Autobiography.”Jimmy was a good drummer who brought his own thing to the sound of the group.”

Cobb played on five Davis studio albums, beginning with ‘Porgy & Bess’ in 1957 and ending with 1961’s ‘Someday My Prince Will Come.’ In between, he played on the 1959 LP, ‘Kind Of Blue.’ No one on that momentous session – not even Miles Davis – realised how big the album would be. “That day was just another day that we had a record date,” Cobb said in 2008. “I don’t think anybody ever thought it was going to turn out like it did. I know if Miles had thought it was going to be anything special he’d have asked for a ton of money that day.”

The drummer also played on Davis’ ‘Sketches Of Spain’ LP, another classic album. He recorded, too, with John Coltrane on several Prestige album sessions in the late ’50s and appeared on albums by Wes Montgomery, Art Pepper, Shirley Scott, Bobby Timmons, and Sarah Vaughan.

He didn’t make his first album as a leader until 1983 and went on to front seventeen solo passages. In 2008 he was honoured by an NEA Jazz Masters Award. In 2009, at the age of 80, he brought his So What band (featuring the late Wallace Roney on trumpet) to the UK where he played selections from ‘Kind Of Blue.’