KICKIN’ UP A COMMOTION… 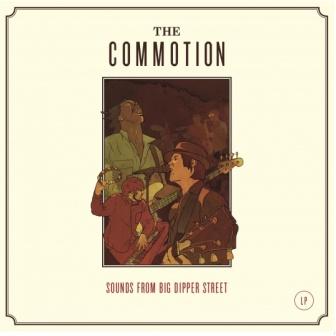 To prove (if indeed proof was required) that soul is a truly international musical language, Swedish band, THE COMMOTION, have just launched their first full length album and the ten track ‘Sounds From Big Dipper Street’ is an ambitiously soulful affair.

The band was founded in 2008 by guitarist MIKAEL ERIKSSON and bass player AMADOU KHAN. They shared a mutual passion for classic soul and wanted their band to recreate the sounds of ARETHA, THE TEMPTATIONS, MARVIN GAYE and other soul luminaries. They took as their template the wonderful SHARON JONES and the DAP KINGS and naturally thought that a female vocalist was essential. But after several auditions, a long recruitment process and cutting demos in the studio the duo realized that ERIKSSON himself had the required vocal power to handle lead duties.

COMMOTION’S music is rough hewn… soul with a rocky undertow. ‘Face Your Ghosts’ is the LP’s immediate grabber… weird and atmospheric while ‘Black Heart’ is real slow burner.

To show their commitment to old school values the album comes primarily in vinyl – though for the “vinyl impaired” (COMMOTION’S comment) there is a CD version available too. Find out more @ www.facebook.com/thecommotionsweden