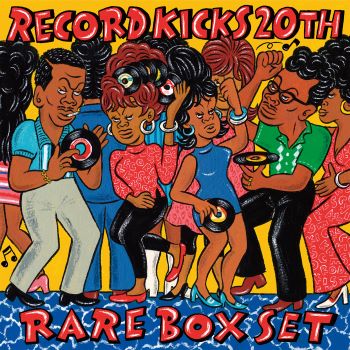 Milan based indie label, RECORD KICKS celebrates its 20th Anniversary this  year and in the accepted fashion, the team  is lining up a plethora of musical goodies to mark the occasion!

First up there’s a limited edition “Rare Box Set” consisting of ten 45 showcasing the very best of the label’s catalogue.  The idea behind the selections is to retrace the story of these past 20 years of Record Kicks. Released on March 3rd, the release is limited to just 500 copies but it will be released digitally on that same day. Of the 20 tracks on the “Rare Boxset”, 11 tracks are previously unreleased on 45 vinyl, while 9 are reissues of in-demand tracks..

Among the cuts released for the first time on 45, there’s ‘Easy To Come Home’ by Sydney funk band Dojo Cuts, ‘Your Love is Mine’ by The New Mastersounds feat. Corinne Bailey Rae and remixed by Nostalgia 77, ‘50 Foot Woman’ by Hannah Williams & The Affirmations, ‘Soul Connection’ by The Diplomats of Solid Sound and ‘Soul of My Life’ by The Tibbs. For the first time on 45 vinyl, there are also two singles from  Calibro 35: ‘Stainless Steel’ from their album ‘Traitors’ and ‘Ungwana Bay Launch Complex; from ‘S.P.A.C.E.’, The Diasonics with ‘Andromeda’, taken from their debut album ‘Origin Of Forms’, and Whatitdo Archive Group’s ‘Blood Chief’ from the band’s album ‘The Black Stone Affair’.

Tracks back by popular demand include the afrofunk cover of The Arctic Monkeys’ ‘I Bet You Look Good On The Dancefloor’ by Baby Charles, JB’s classic ‘Soul Power’ by Kokolo remixed by Lack Of Afro, The Bluebeaters with ‘Catch That Teardrop’ and ‘Toxic (One Drop Version)’ singles, the northern soul flavoured r ‘I’m a Good Woman’  by Hannah Williams & The Tastemakers and  the funk stormer ‘I’m Not Your Regular Woman’ by Marta Ren & The Groovelvets.

Great indie music throughout and great cover too (above). The artwork (an homage to Afro-American culture) is by  Japanese artist Ruminz.