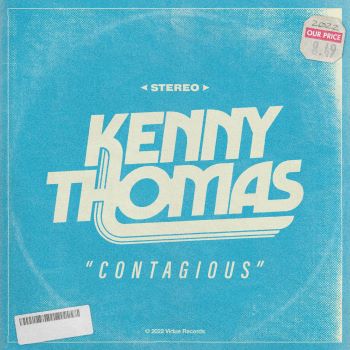 Been a tough few years for us all and sadly looks like things won’t be much better  for the  foreseeable. It’s been particularly tough for good ole KENNY THOMAS. Last autumn he was hospitalized with COVID and, of course, for a few years now he’s been working hard raising funds for specialist medical treatment for his daughter, Christina, who has an inoperable brain tumour. The good news is that Christina has had some treatments from  German medical experts and she is now a happy 9-year-old who remains reasonably stable. Kenny too is back to his to old self and over the last few months he’s been on the road with all-star band of musicians performing at some of the biggest festivals in the UK.

Even better new is the fact that Mr T is releasing some new music – a single due 22nd September. Given what’s happened to him, it’s weird that the tune’s title is ‘Contagious’. ‘Contagious’ is actually Kenny’s first original new music released in over ten years but it sounds like he’s never been away. The cut is upbeat and optimistic (just what’s needed right now!); it’s bright and breezy and Ken’s in fine vocal  form… you’d never expect me to say it, but, yes, it’s “contagious”!

More good news – KT will be headlining the O2 Shepherds Bush Empire on Saturday 10th December. Of course, he’ll be showcasing ‘Contagious’ alongside all his big hits and a lot more!