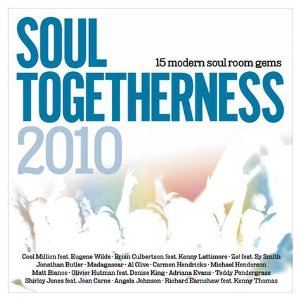 Expansion Records’ annual modern soul fest that is their ‘Soul Togetherness’ compilation has just hit the racks. As ever compiled by RALPH TEE and RICHARD SEARLING, the 2010 edition is crammed with the tastiest mix of oldies and new tunes with the common denominators being class, quality and instant modern soul foot-tapping appeal. Oldest cut on offer is MICHAEL HENDERSON’S delightful 1977 duet with RENA SCOTT, ‘Take Me I’m Yours’ while there’s plenty from 2010’s vintage soul harvest including COOL MILLION’S EUGENE WILDE-vocalised ‘Back For More’ and JOEY NEGRO’S in-demand remix of MATT BIANCO’S ‘Half A Minute’. Biggest bonus though is the inclusion of the stunning Phat Phili Mix of TEDDY PENDERGRASS’ ‘Believe In Love’. It sneaked out on CD back in 1993 on a Mastercuts compilation and it’s been hugely sought-after ever since.

Expansion have also just reissued a wonderful twofer on KENI BURKE – ‘You’re The Best’ coupled with ‘Changes’, while upcoming they have an intriguing and mysterious set from TOM GLIDE and the LUV ALL STARS (actually, a French album featuring a host of top US soul players) and – three cheers – a reissue of RONNIE McNEIR’S ‘Love Is Coming Down’. Then, through the label’s links with JAZZ FM, there’s a twofer on RONNIE LAWS (‘Friends and Strangers’ and ‘Flame’) and a new JAZZ FM double album, 30 track compilation which features exclusive remixes on EARTH WIND AND FIRE and BONEY JAMES

Full reviews of all these albums on SJF very, very soon.