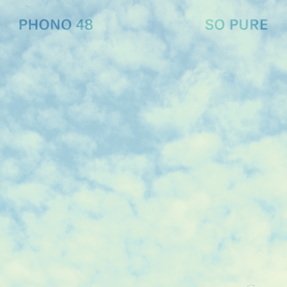 Phono 48 is the collective name for six musicians who had never worked together before and went into a London studio to record a one-off single from scratch in 48 hours. The concept was masterminded by the noted pop and rock photographer Dean Chalkley, who pitched the idea of making the record as part of a multi-media project called ‘New Perspectives,’ which he developed in tandem with the clothing brand Sunspel; their idea was to combine music with photography, film, and the written word (in the form of a journal by writer Andy Thomas) and create a unique artistic venture.

What resulted from the recording session was ‘So Pure,’ a succulent slice of jazz-infused soul whose flavour is simultaneously cutting edge and retro. The addictive track is built on the sleek marriage of Solomon Douglas’ sinuous bassline and Kitty Durham’s crisp drums. It features the neo-soul singer Laville, whose honeyed vocals are framed by the lush electric piano of Amané Suganami and the jazzy guitar licks of the band’s musical director Nick Corbin. (The track is being released via Corbin’s own label, Big A. C. Records).

‘So Pure’ will be released as a beautifully packaged 12″ vinyl single on February 18th and will also be available to buy digitally and from steaming platforms via Big A. C. Records.

The ‘New Perspectives’ project will feature at the Museum Of Youth Culture, 154-156 Shaftesbury Avenue, London on 17th February and run for two weeks; it will include a photo exhibition and a short film documenting the Phono 48 recording session.