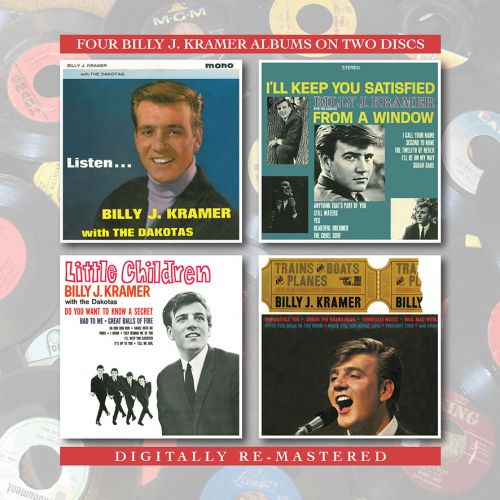 BGO Records have just released a 2Cd package that brings together four LPs recorded by Merseybeat stars BILLY J KRAMER and the DAKOTAS between 1963 and 1965. Kramer, born William Ashton, was part of Brain Epstein’s stable of artists and no surprise that the management guru got john Lennon and Paul McCartney to supply him with songs for his singles. Consequently Lennon and McCartney’s ‘Do You Want To Know A Secret’, ‘Bad To Me’ and ‘I’ll Keep You Satisfied’ became, chart riders for Billy J – now backed by the Dakotas, a combo that Epstein had nicked from Manchester beat boy Pete McClaine.

To support the singles, Parlophone issued 4 Billy J Kramer albums and like his stage shows the long players were crammed with covers of then popular pop and soul hits. Now brought together by BGO, 60s collectors can enjoy Kramer/Merseybeat versions of things like the Drifters’ ‘Dance With Me’ and ‘Under The Boardwalk’, the Crystals’ ‘Da Doo Ron Ron’ and the Platter’s ‘Twilight Time’. Of course, you also get all those early Lennon/McCartney pop gems too!