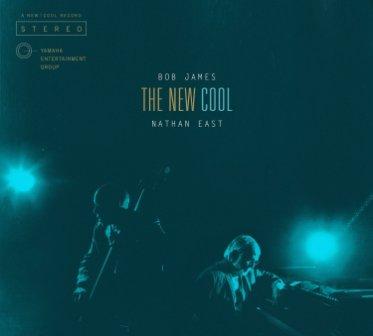 ‘THE NEW COOL’ is the title of a new collaborative effort between one half of smooth jazz outfit, Fourplay…. pianist BOB JAMES and bassist NATHAN EAST.

The idea for the album came from Chris Gero, head of the Yamaha Entertainment Group who invited East and James to Nashville to record with state-of-the-art Yamaha instruments. The duo accepted and came up with an audacious 11 tracker that might surprise those who know them chiefly via their work with Fourplay.

The music on ‘The New Cool’ is, well, way cooler… more straight ahead jazz than the smoother sounds that Fourplay are rightly famous for. That fact is evident from the start with the album’s title cut – pastoral piano wanderings engaging with meandering bass lines.

The album is largely a two hander though the strings of the Nashville Recording Orchestra star on several cuts – notably the cinematic ‘All Will Be Revealed’ which also features a touch of East’s celebrated vocalese. Then on the climatic ‘Turbulence’ and the Latino-flavoured ‘Canto Y Danza’ there’s welcome input from percussionist Rafael Padilla and drummer Scott Williamson.

Biggest surprise, however, is the cover of Willie Nelson’s ‘Crazy’. The Nashville strings add plenty of sweetness while Vince Gill (yes, we’re in Nashville, remember) offers his usual authoritative vocal and it’s clear that James and East were having great fun here.