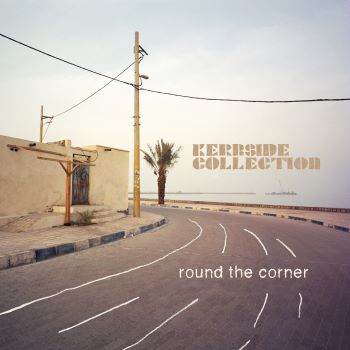 ‘Round The Corner’ is the new album from KERBSIDE COLLECTION  a top Aussie soul and funk instrumental band. They debuted in 2013 with Mind The Curb’ – a spirited and lively 8 tracker that reflected the then band’s line up’s penchant for the soul jazz sounds of people like Wes Montgomery and Jimmy Smith. At the back end of last year they released a single, ‘Glaze’ which offers a subtly different feel to that – gritty and funky, yes, but  with a lighter touch that drew comparison with Down To The Bone, the Mizells even 4Hero.

That ’Glaze’ single was followed by the title track from the promised ‘Round The Corner’ album and the tune, though a tad smoother than ‘Glaze’, was still funky and soulful in that Mizell kind of way. Now the whole album is with us and it proffers plenty more of that sound, kicking off with the brash and brassy  ‘Ortigas’(the Spanish botanical name of a highly irritating plant species by the way!).

The group’s influences are laid bare with the gritty, guitar-led ‘Metalurgica’ – a cover of a classic 1977 jazz-funk tune by Banda Black Rio and on ‘It Happens Everyday’ – the band’s lazy and laid back  take on the Crusaders’ Joe Sample-penned tune. ‘Cookin’ On 3 Burners’ is another clue to the band’s sound and influences; it’s  an obvious homage to the fellow Aussie band of that name (the Burners’  Jake Mason has guested on several Kerbside tunes in the past; good to see that nepotism is alive and well!).

Amongst other album highlights is the closer, ‘Horizonte (Colours)’ – a sort of hybrid of reggae and South Pacific flavours. It brims with optimism  and sunshine – hopefully some of that is “round the corner” for us soon!

KERBSIDE COLLECTION; ‘Round The Corner’ out now via Legere Records.