KEEP YOUR SPIRITS UP! 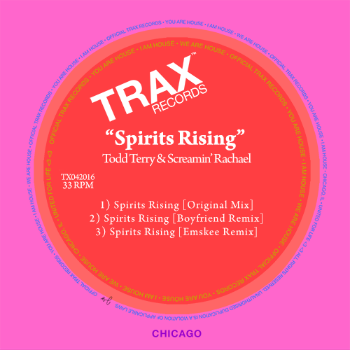 Fans of Soulful House who like things a little quirkier than the norm might want to check out the latest single from America’s TRAX Records.

Tune in question is ‘Spirits Rising’ from the wonderfully-named SCREAMIN’ RACHAEL alongside the legendary TODD TERRY.

At the moment, the cut comes in three mixes but all feature the bounciest, deepest bass line of 2016 so far. Soul fans will most likely connect with the ‘Boyfriend’ mix since the Carmelo Carone tweak veers wildly into the land of electro dance while the Emskee version features some heavy rapping