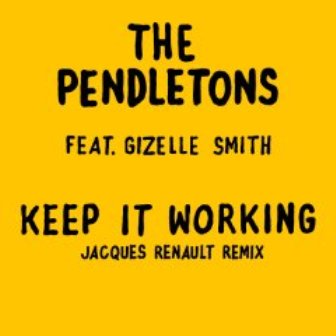 The PENDLETONS’ (E da BOSS and TRAILER LIMON) recent album, ‘2 Steps Away’ impressed all and sundry. Stuffed with retro grooves, it’ll be up there in everyone’s year end “best of” listings.

One of the LP’s key cuts was ‘Keep It Working’ – featuring a vocal from Gizelle Smith, the front woman of The Mighty Mocambos and daughter of a band-member of the legendary Four Tops. Her pedigree shone through on the busy, bustling, Northern flavoured ‘Keep It Working’ and now that very tune has won remix status courtesy of NYC disco don JACQUES RENAULT. He turns the cut into an almost 6 minutes worth of zipping, Paradise Garage-esque groove. Larry Levan would be proud of it and it’s out now on the wonderfully named Bastard Jazz label!