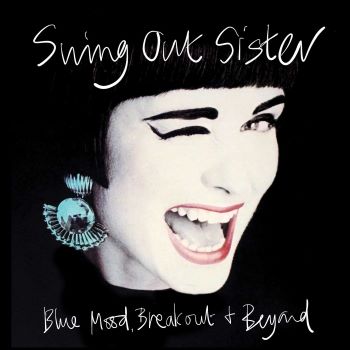 SWING OUT SISTER are something of Brit smooth, blue-eyed soul institution!  Originally a trio – Andy Connell, Martin Jackson and Corinne Drewery, they broke out in 1986 with the single ‘Break Out!’ (see what we did there!). It’s cheery, ear worm, optimism made it a hit on both sides of the Atlantic and since then SOS have gone on to create a very special niche in the music world with their very particular take on sophisticated soul, cinematic sweeps, smooth jazz, sunshine pop and easy listening.

‘Breakout’ was the lead track on the band’s first album, ‘It’s Better To Travel’ and to celebrate the 35th anniversary of that release, Cherry Red imprint, Cherry Pop have just released a proper jumbo box set that tracks the band’s early career , the years 1985- 1992. And when we say “jumbo” we mean massive. The devilishly attractive box contains 8 CDs that offer 90 plus tracks alongside a comprehensive booklet choc-a-bloc with info, interviews and memorabilia and rather special illustrations from Ms Drewery herself!

Everything is included (bar that kitchen sink) – the band’s first three studio albums (after the debut, ‘It’s Better To Travel’, Jackson left the band, leaving SOS as a duo), a live set recorded at the Jazz Café  and four CDs of mixes, rare edits  and B sides.

All the hits are here of course, including ‘Breakout’, Fooled By A Smile’, Surrender’ and ‘Notgonnachnage’. All familiar, naturally, but the album tracks reveal a depth to the band that the casual radio listener might not have cottoned on to. For  instance, SOS fans will know that they made a great cover of Young-Holt/Barbra Ackiln’s ‘Soulful Strut’/’Am I The Same Girl’  while the Jazz Café recording proves that they weren’t just a studio creation. They could cut it live – try the ten and half minute version  of ‘Who Let The Love Out’ which incorporates Lonnie Liston Smith’s ‘Expansions’ and Burt Bacharach’s ‘Wives And Lovers’. The live set also features an enthusiastic six and half minute version of the aforementioned ‘Am I The Same Girl’. If you like the song, by the way, the box has four versions of it (all the mixes you’ll need) while there are six mixes of ‘Breakout’ and ten of ‘Notgonnachnage’.

Like we said everything is included and alongside the lavish booklet it gives you everything you’ll ever need to know about the first part of the career of a great British band – maybe (and very sadly) underrated in the mainstream but revered by those who know their music. Hopefullyy there’s a volume 2 in the pipeline. In the meantime, there’s lots  here to cherish… oh  and the name by the way comes from an obscure 1945 B movie, ‘Swing Out Sister’. It seems it was the only name the original trio could agree on  but its seems that they all actually hated it! Whatever, it’s done ‘em no harm at all … please keep on swingin’!

SWING OUT SISTER Blue Mood, Breakout and Beyond – out now via Cherry Pop