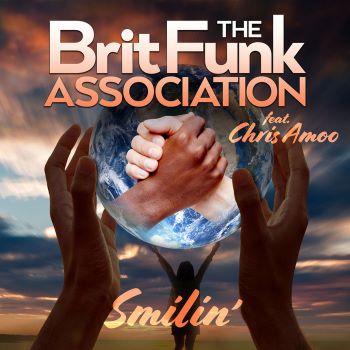 By common consent one of this year’s best albums has been ‘Lifted’ from the BRIT FUNK ASSOCIATION. The facts speak for themselves. The LP topped all major genre charts at home including, Amazon Bestsellers in R and B and iTunes as well as being in the Top 10 genre charts around the world including, Japan, Spain, Germany, Italy, and Australia. The album has also sold very well as an export to the USA. The album also topped the UK Soul Chart and Network Soul Chart.

They’re just the statistics though; ‘Lifted’ lifted everyone’s sprits at a time when, God knows, they needed considerable lifting. It was /is stuffed with optimism and joy and there was no more “up” tune on the collection than ‘Smilin’…. so little wonder that that song’s been chosen as the first official single from the album… BUT with one massive bonus!

The Brit Funk team have drafted in another Brit soul hero to spice up and soul up the vocals… none other than Scouse land’s top soul voice … CHRIS AMOO from the Real Thing. The genial Liverpudlian has such a distinctive voice and he really nails the song… not once but twice! You see the ‘Smilin’ single comes in two new mixes. The “Funkified” mix sort of speaks for itself while the “Uptown” mix is, well, just totally splendid. No disrespect to the Brit Funk boys but this mix sounds like a long-lost Real Thing classic- a potential chart topper and we can’t say fairer than that!

It’s one GREAT tune and, corny, yes, but ‘Smilin’’ is  guaranteed to make you smile! Out now via Expansion.