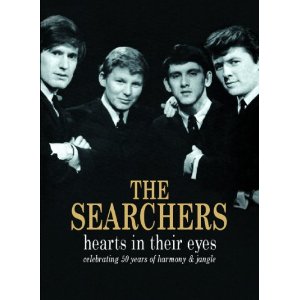 THE SEARCHERS were one of the first wave of 60s Merseybeat bands. In the early 60s in their native Liverpool they were second only to THE BEATLES in popularity and while the FAB 4 held sway at the Cavern, THE SEARCHERS had an enduring residency at the equally iconic Iron Door Club. There they proffered their intoxicating take on then current American R&R, R&B, soul and pop … stuff rarely heard outside the cellar club beat scene. By 1963 they were signed to Pye Records and soon their souped up, harmonic version of THE DRIFTERS’ ‘Sweets For My Sweet’ was sitting atop the UK singles chart. More hits followed including the classic readings of ‘Needles And Pins’ and ‘When You Walk In The Room’.

By 1966, as musical tastes changed, the hits started to dry up but the group continued to release quality music – by now featuring a distinctive, signature, jangling 12 string Rickenbacker guitar sound coupled with precise, soft harmonies… a sound that was to be copied in America by bands like THE BYRDS, BIG STAR and TOM PETTY and the HEARTBREAKERS.

Moving on from Pye, THE SEARCHERS subsequently recorded for Liberty, RCA and the indie Sire Records where two 1980s LPs introduced them to a younger maybe hipper audience. THE SEARCHERS (featuring one original member, JOHN McNALLY and long time bassist FRANK ALLEN) still record and tour regularly at shows that are more often than not sold out.

You can catch up with all THE SEARCHERS back story on a new 4 CD, 120 track box set that follows their career from the IRON DOOR club right up to this new millennium. Released on Sanctuary, ‘Hearts In Their Eyes’ is a must for collectors and 60s soul fans with a penchant for cover versions of their US favourites. Here you can enjoy great SEARCHERS’ 60s versions of stuff like the aforementioned ‘Sweets For My Sweet’ along with takes on BARRETT STRONG’S ‘Money’, THE ORLONS’ ‘Don’t Throw Your Love Away’, DIONNE WARWICK’S ‘This Empty Place’, LOU JOHNSON’S ‘Magic Potion’, JIMMY HUGHES’ ‘Goodbye My Love’ and much more.

THE SEARCHERS ‘HEARTS IN THEIR EYES’ is out now on SANCTUARY RECORDS.