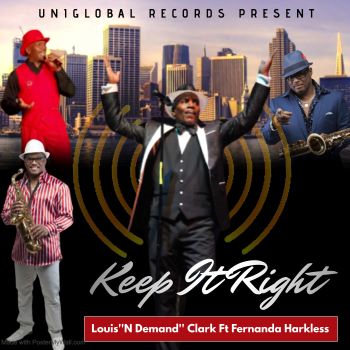 LOUIS CLARK is a soul singer who works the clubs and lounges of Las Vegas where he’s known as “Mr N’Demand” – which is also the name of his band. A few months back Louis and his band teamed up with songwriter Jay A Blakey and veteran soul producer Preston Glass to craft a deceptively simple, but catchy and clever new soul confection…. ‘Keep It Right’ . The result (just out) is a joyous romp that’s bound to bring a smile to faces and set feet tapping. It makes no demands and in some ways it reminds me of those recent singles from Alexander Morris. Louis has the same old school approach as Mr M while the sax work from Fernando Harkless is the cherry on the soulful treat that is ‘Keep It Right. Out now via Uniglobal Records.