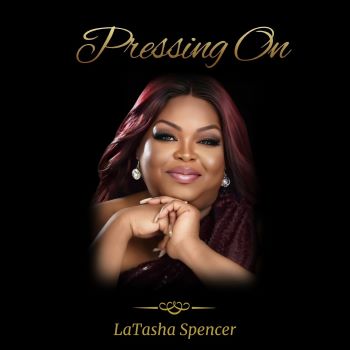 Master soul entrepreneur HERB MIDDLETON is the brains behind a lovely new, real  soul single from  Harlem’s LATASHA SPENCER. Her single is a gorgeous, properly soulful ‘Pressing On’. After just one listen you’ll say, “that girl has a VOICE” and you’d be right. That “voice” is pure gospel trained! LaTasha, you see, grew up in a gospel family. An aunt had sung with the legendary Sam Cooke and her grandmother had performed with James Cleveland, John Sellers and with a gospel group called the Tears of Music. As a youngster, LaTasha wowed congregations throughout Harlem with her testifying, gospel prowess and she was soon a mainstay on the national gospel circuit.

Right now we believe that LaTasha is still working with gospel choirs but she’s also hooked up with the aforementioned Herb Middleton.

Herb is the producer behind LaTasha’s ‘Pressing On’ and sensibly the song, arrangement and production are all geared to showcase the singer’s wonderful soulful delivery. The message in the music can be interpreted  in both the spiritual and secular contexts – you know, keep on keepin’ on, but it’s the voice that carries the day! Shades of the great Anne Nesby and a whole host of gospel divas, but for sure, LaTasha is her own woman. If we did “single of  the week”  this would be it!!!