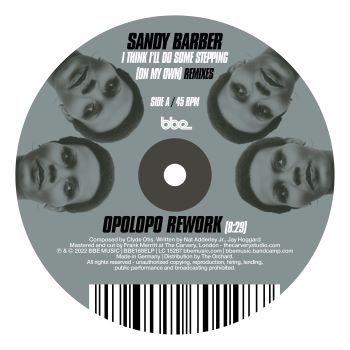 Native New York SANDY BARBER is a proper underground soul heroine. Her cult reputation rests on her 1977 LP ‘The Best Is Yet To Come’. Produced by veteran Clyde Otis, it didn’t do too much till the collectors picked up on one big dance tune called ‘I Think I’ll Do Some Stepping On My Own’ and, then, of course, copies of the album (those that people could find) started to change hands for big bucks.

The album was reissued back in 2011 on bbe Records and ‘Stepping’ remained the BIG tune and it sounded even bigger in two specially commissioned remixes from two big names – Opolopo and John Morales.

If you know the track and indeed the mixes you’ll know they’re all quality dance tunes and very much still in demand, so the nice people at bbe are having the two mixes re-pressed in newly re-mastered formats courtesy of Carvery Studios. Out now, we believe.