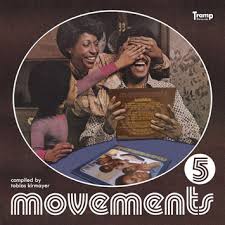 Over the years Germany’s TRAMP RECORDS has kept the flag flying for authentic soul, jazz and funk – both through their single artist albums and via their carefully researched ‘Movements’ compilations.

Tramp have just released their fifth ‘Movements’ compilation and the 17 tracker is every bit as good as the previous four. The album’s signature sound is rough hewn funk as typified by the slow- burning opener, ‘Soul Chicken’ from BOBBY ALLEN and the EXCEPTIONS. ALLEN is typical of the artists on the album. From rural Louisiana, he’s been making music since his teens and ‘Soul Chicken’ was recorded in 1970. It was a local hit and BOBBY was content with that. Happy just to make music, he’s still working throughout Louisiana. In much the same funk vein are RAY WEATHERSPOON’S wonderfully-titled ‘Stop Stuffin’ And Start Sho’ Nuffin”, WILDFIRE’S ‘Tend To Your Business’ and the instrumental ‘Monkey In A Sack’ from L’IL BUCK AND THE TOP CATS.

THE IRIS BELL TRIO’S ‘Baby You Got Soul’ is a tad different. The cut is a delicious slab of 60s soul-jazz featuring a great vocal from BUTCH MILES while JIMMY ELLIS’ ‘Puttin’ It On Your Mind’ brings a touch of blues to the collection.

Most of the material is original – but the two big covers are the DAVE HARRIS TRIO’S stab at ‘Summertime’ and a version of ‘It Ain’t Necessarily So’ from NANNIE PORRES with the CLAES FAGERSTEDTS TRIO. The artists are Swedish and the song was recorded in Stockholm – proving conclusively the universality of soul, jazz and funk.

From Louisiana to Sweden via Bavaria… Tramp’s ‘Movements 5’ is worth investigating … find out more @ www.tramprecords.com