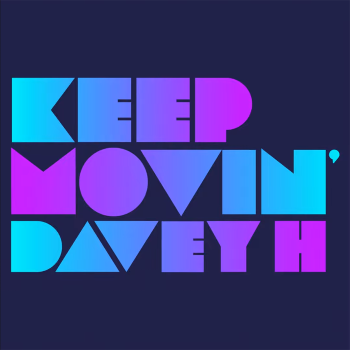 DAVID HUMPHREY is one of the UK’s best known and prolific drummers. He’s a veteran of countless sessions across all kinds of genres and, maybe surprisingly, he’s worked with John Lydon in an incarnation of Public Image Limited! In the early 80s he founded the group Reflex – maybe best known for their 1981 outing ‘Funny Situation’.

For some years now Mr H has worked as DAVEY H and that’s the moniker he’s using for his latest record – a tight and soulful dance groove, ‘Keep Movin”. It’s big and optimistic with a booming bassline and clever percussion work – but you’d except that! There’s also a fab and feisty female vocal. Sadly, the lady is anonymous on my copy. Put it all together, and the cut will, for sure, keep you moving!

Earlier this Summer, Davey H’s Keep Movin’’ enjoyed success when it appeared on Bandcamp and  now the track gets more legs as it’s been picked up by Newcastle’s SIX NINE RECORDS. The original is a great piece of work  but as an extra  bonus, the Six Nine people are offering the tune in a rather special Yuki “T-Groove” Takahashi remix that offers a slightly different perspective without losing any of the groove!

Both mixes will be available on 7” vinyl shortly. In the meantime, you can buy/download or stream both mixes from your favourite platform. Find out more @ http://www.sixninerecords.co.uk/