KEEP ON KEEPING ON…. 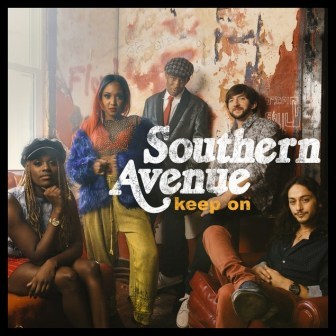 ‘Keep On’ is the new long player from soul/blues band SOUTHERN AVENUE. That name offers a big clue to their sound – yes a Memphis style take on soul with a rocky/bluesy undertow. Maybe the best point of reference is the sound of Delaney and Bonnie.

The group’s USP is the fact that the line up includes two sisters – vocalist Tierinii Jackson and drummer Tikyra Jackson. The other band members are Ori Naftaly (guitar) and Jeremy Powell (keyboards).

‘Keep On’ is Southern Avenue’s second album and comes two years after their eponymous debut set that was a top ten blues album. This new collection is sure to emulate, if not better that feat since it contains the same mix of dirty, country flavoured soul, rock riffs and bluesy moods. Soul fans will be particularly interested in one cut – the all too short ‘We’ve Got The Music’. This sprightly little thing is actually a duet between Tierinii Jackson and someone called William Bell (never heard of him!!!).