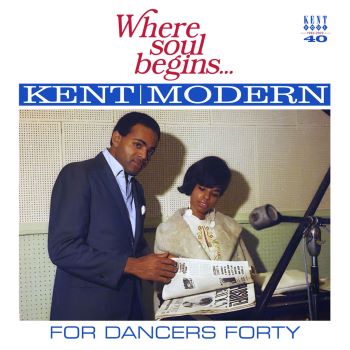 It’s been forty years since Ace Records subsidiary, KENT issued its first vinyl LP – the ground breaking ‘For Dancers Only’. With a catalogue number of Kent 001, it’s now hugely collectable  and no wonder. It wasn’t just a vanguard release for soul collectors, the music was scintillating. Compiled by Ady Croasdell from (mainly) the archive of vintage American west coast label Modern’s Kent imprint (which explains why the Ace soul imprint bears the name “Kent”), it offered tunes from people like Mary Love, ZZ Hill, the Ikettes and Willie Hutch and was an instant success with many of the tracks going on to become big clubs favourites. Plenty of ‘em still are!

To commemorate the fortieth anniversary of the release Ace/Kent recently issued another vinyl LP with music from much the same sources. It was niftily titled ‘For Dancers Forty’ and was another pronounced success. Now for those who’ve yet to catch up with this new-fangled vinyl  thing, Ace/Kent are issuing a CD version of ‘For Dancers Forty’.

The little silver disc is a 24 tracker and again most of the material is drawn from the vaults of Kent/Modern and associated labels and though both the LP and the CD have the same titles, only three tracks are common to both iterations – Tommy Youngblood’s bluesy ‘Tobacco Road North’, Aaron Collins and the Teen Queens’ pacey ‘Walk The Chalk Line’ and the always  consistent ZZ Hill’s ‘That’s It’.

Amongst the “fresh” tracks are Beatrice Lee’s mournful ‘Help Me’, Ike and Tina’s ‘It’s Crazy Baby’,  a version of the perennial ‘Here Comes The Judge’ from Larry and Tommy and  BB King’s ‘I’ve Got Papers On You’ which proves (if you ever doubted it, that the Blues Boys could really swing!). Northern Soul devotees will enjoy The Sweethearts’ Motownesque ‘No More Tears’ (have they pinched a line from ‘Stop In The Name Of Love’?), Jimmy Bee’s new and improved ‘Wanting You’ with added chorus, which has a digital debut and Clay Hammond’s cult mover ‘You Brought It All On Yourself’.

So, yes, plenty of variety and real soul quality here – just as there was forty years ago. Maybe another forty?